Phoenix of the Sun

Fighting for the Alliance on Emerald Dream

Welcome to Phoenix of the Sun.

Please read our Recruitment Instructions, Guild Codex & Raid Codex before registering on the forums. Remember a well written application can bring you a long way and please let us know who you are as a person; it's you not your ability we want.

PotS is a mature and friendly guild with the emphasis on maintaining a guild with a family feel, where members are respectful of one another. We only accept members who are 15 years of age or older. We are more interested in recruiting the person behind the character than the character itself. PotS aims to offer our members the chance of experiencing all aspects of WoW and with this in mind we are interested in recruiting members who share this interest. We are not just interested in endgame raiding and as a result if this is your sole purpose in joining us then I’d suggest approaching a more endgame orientated guild. 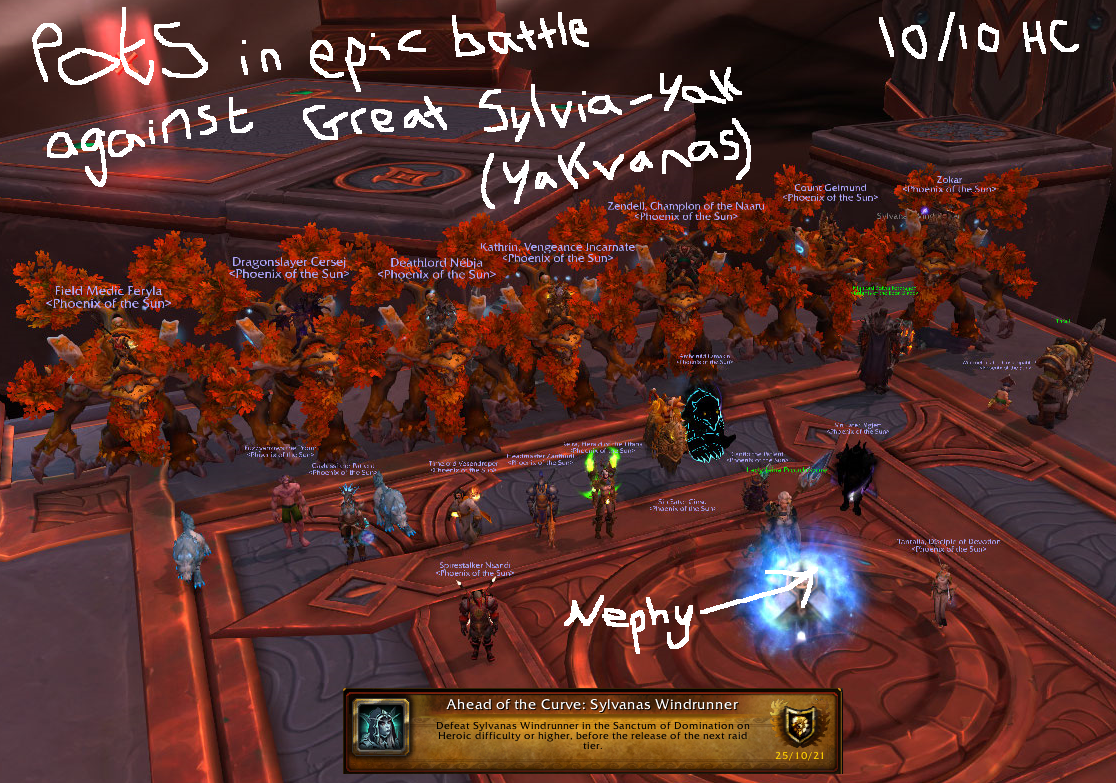 
After we had 85 wipes it was finally Denathrius' turn to wipe: 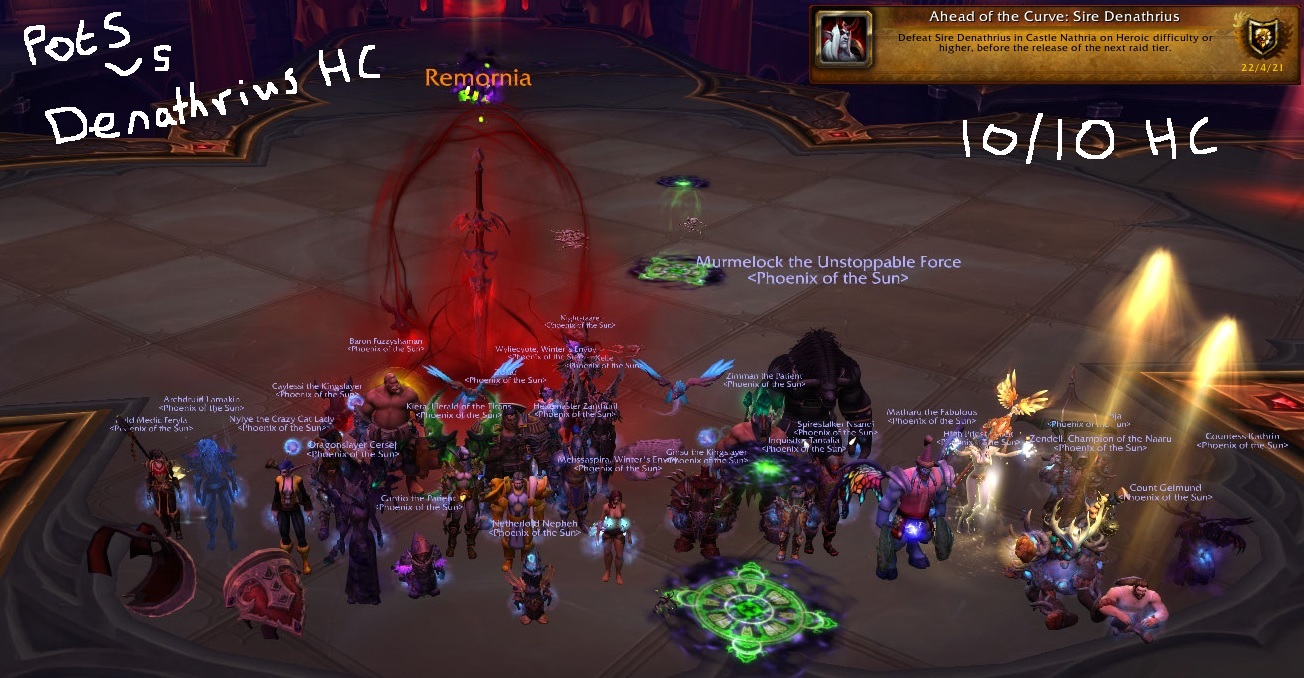 Thanks everyone who helped push for this kill. It's been quite an intense focus on this for the past couple of weeks but the practice really paid off as the kill was nice and smooth coming in fresh last night. For those who missed it, sorry you missed the kill after putting in the practice but we will aim to kill him more!

As 9.1 and the next raid will still be some time off we will still be raiding but I would expect to see more alt runs and the like mixed in. If anyone has something they'd like to do, feel free to say!
Views: 1118  •  Comments: 3  •  Write comments
Top


Let it be known that the following members has risen through the ranks, for their helpfulness, participation in guild activities and being good at moo'ing.

May their membership last a long time and their playtime be plentiful!


I think we had a Pots-first with Castle Nathria opening as we had so many signups (37 on the busiest night!) that we had to split into two separate raid groups to fit everyone in. Thankfully this balanced out nicely and both groups killed bosses at the same rate, putting us 3/10 after the first night and 5/10 after the second. For the monday raid we had exactly 30 people online so we were able to run a single maxed out group for the 6th and 7th bosses. We also killed several of these before they got nerfed after, so well done getting through them before adjustments.

I want to say a massive thank you to New Guy for running one of the groups. It was a lot to do with 3 nights in the opening week where we had to learn all the fights and I know how draining that can be. It wouldn't have been possible to get everyone in without Feryla organising a group, so thank you

Also a thanks to everyone who stepped up with offspecs to help cover tanking and healing for the double raids. I know several of you had expected to be DPSing and ended up performing another role, so well done and thanks again - we also couldn't have managed it without that.

Without further waffling on I've seamlessly merged the screenshots from the two groups (for the first 5 kills) into a composite image below: 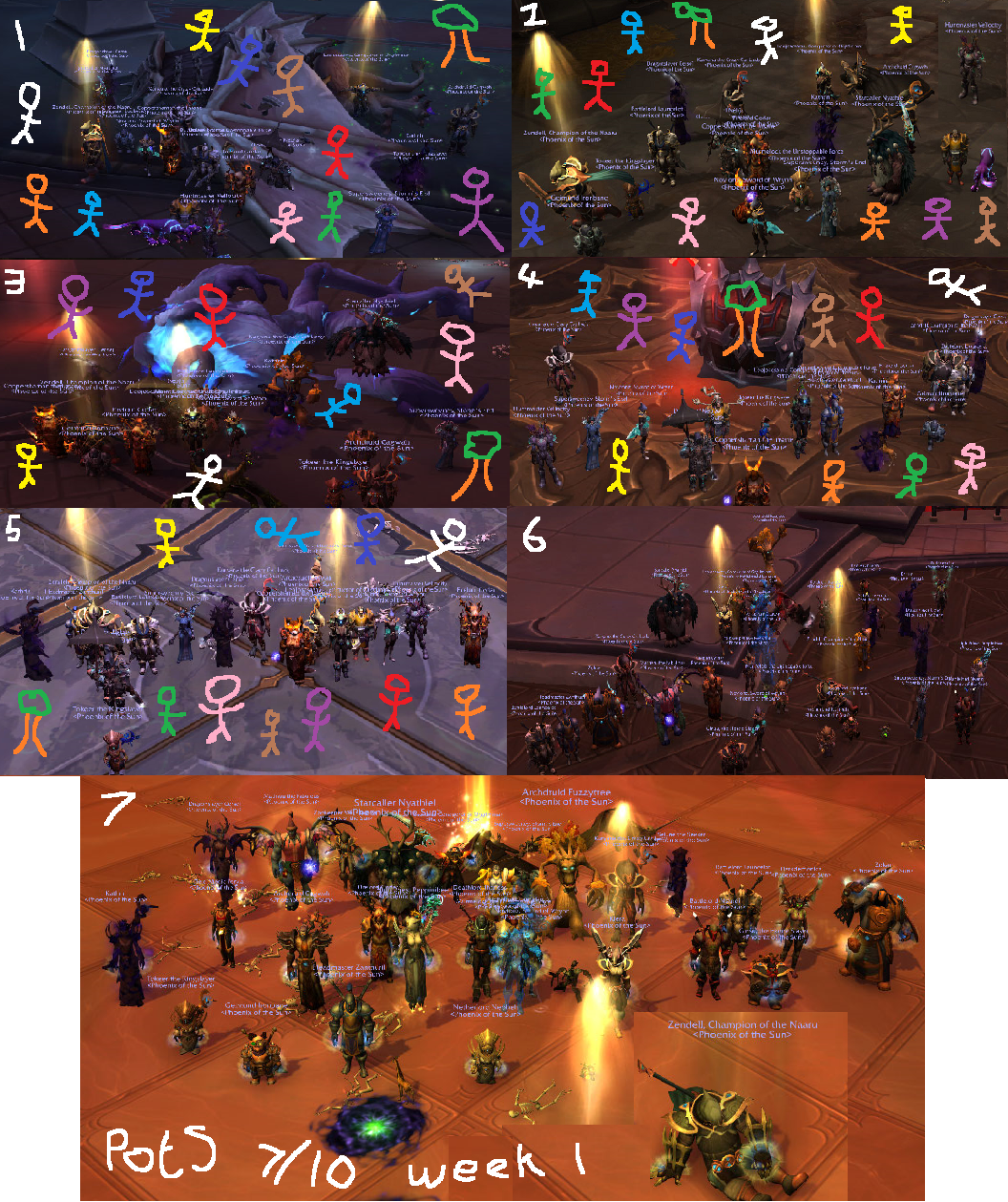 As tradition dictates, there will be a PotS race for the first ones to new max level. Post a screenshot (on Discord) of your character at 60 as soon as you ding, and we'll give a nice prize to the first one, as well as two runners-up, and also prizes for the first one of each class. Rumour has it there's also a secret jury judging the pictures for unknown criteria, and handing out a special prize.

Good luck everyone, and enjoy the launch!

On behalf of the PotS Officer staff,